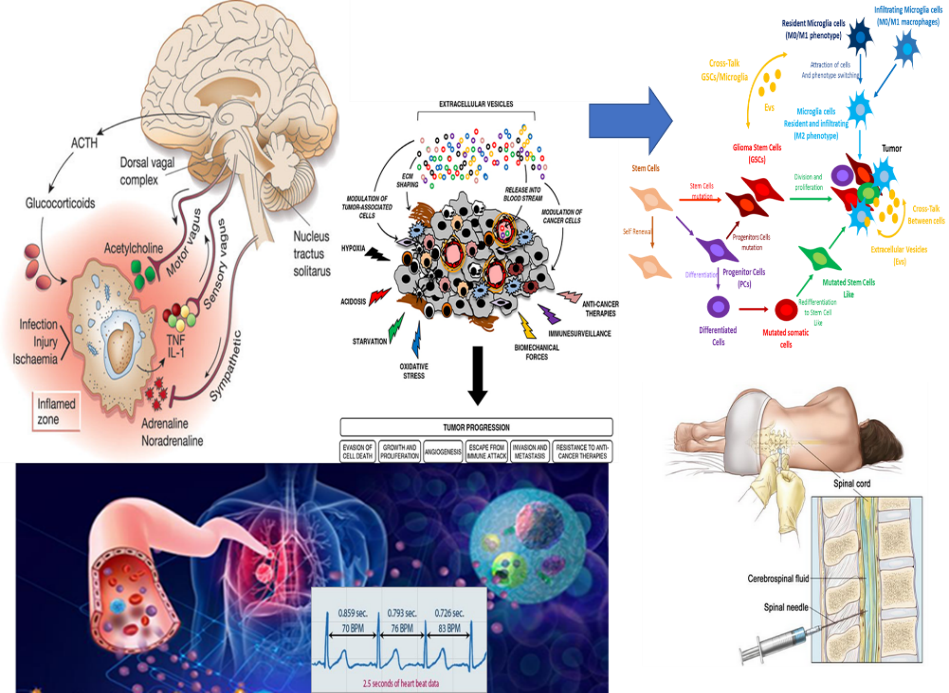 In many tumors, including glioma, intra-tumor molecular heterogeneity is linked to tumor microenvironment responsible for a poor prognosis of the patients, therapy resistance and tumor relapse. The treatment of gliomas is based on SBR classification of tumors of the central nervous system WHO (2007). This classification is questioned because of the incomplete inter-observer reproducibility but also intra-observer. Histo-molecular classifications of glioma tend to complement the WHO purely microscopic classification. Moreover, after expert collegiate replay slides, eliminating reproducibility problems, two patients with the same tumor (histological type and SBR grade) often have a very different life expectancy after receiving the same treatment. New biomarkers are absolutely necessary to streamline the therapeutic sequence, identify response factors to treatments that might improve the duration and quality of survival of patients with glioma. These biomarkers should better stratify patients in clinical trials. Recent clinical studies (EORTC, RTOG) confirmed the interest 1p19q the co-deletion in the management of grade 3 gliomas, inciting to adapt the therapeutic management according to the presence or absence of a deletion 1p19q. The most significant recent studies converge to epigenetic modifications (MGMT methylation, hyper methylation phenotype of gliomas with IDH1 mutation of genes / IDH2, hypomethylation mutation phenotype of gliomas with histone H3). Thus, it appears that it is necessary to create a novel classification of human glioma tumor heterogeneity to overcome recurrence and resistance to therapy. Evaluation of the discrepancy or correlation between the standard WHO 2007 classification the novel ones based on HR MALDI MSI coupled to Spatio-temporal micro-proteomic associated with clinical data will be the first main aim of the project. The second ones is to address the following questions i.e. i) do psychosocial factors (hopelessness, social support and emotional regulation) predict prognosis in BT, ii) ido local and circulating extracellular vesicles (EVs) reflect relevant biology profiles in relation to tumor cell secretion and the response of the tumor’s micro-environment, and perhaps mediate the effects of psychosocial and neurophysiological factors on BT prognosis.

Despite the advent of precision medicine for advanced breast cancer (ABC) patients with several authorized targeted therapies, personalized therapy has not been reached yet for these patients. Recent efforts to identify predictive biomarkers of response to targeted therapies such as everolimus or palbociclib have not been successful. Therapeutic strategies guided by tumor genomic alterations to identify candidate drivers of tumor progression to tailor treatments have not improved outcome. Moreover, due to the infrequency of genomic alterations in breast cancer, a candidate driver could not be detected in all patients. Another potential bottleneck responsible for this lack of success is the limited fidelity of transcription, which can alter the translation and functional role of the genomic alterations. These difficulties can be addressed by analyzing the functional activity of actionable pathways and processes using high throughput microproteomics. We propose a pilot prospective monocentric phase 2 trial to evaluate the feasibility and clinical benefit of prospectively using a high throughput microproteomic technology to select approved drugs to treat patients with heavily pretreated and progressing advanced breast cancer, lacking genomic drivers. In this context, we also integrate the proteome issued from alternative proteins that we named the Ghost-Proteome which is issued from non-cod, Corinne Desmareting region of mRNA but is also implicated in tumor progression. 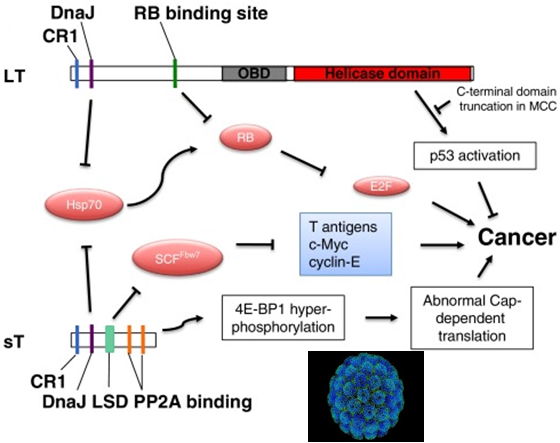 The Merkel cell polyomavirus Oncogenic NETwork (MONET) project will provide a systematic analysis of the intimate relationship between host cells and MCPyV oncogenic proteins. The experiments will be performed both in MCPyV+ and MCPyV- cell lines. Our objectives are to: (i) Define a cancer and viral context-dependent proximal and physical interactome of the MCPy V early region-encoded proteins; (ii) Attribute a functional weight in tumorigenesis regulation to each MCPyV oncogenic protein high-confidence host interactor; and (iii), provide solid evidence to design drug candidate trials design and transfer to translational research. Based on robust published evidence, we hypothesize that MCPyV early region proteins drive multiple oncogenic events in a coordinated manner through interactions with unidentified host cell factors which can be targeted to combat MCC development. 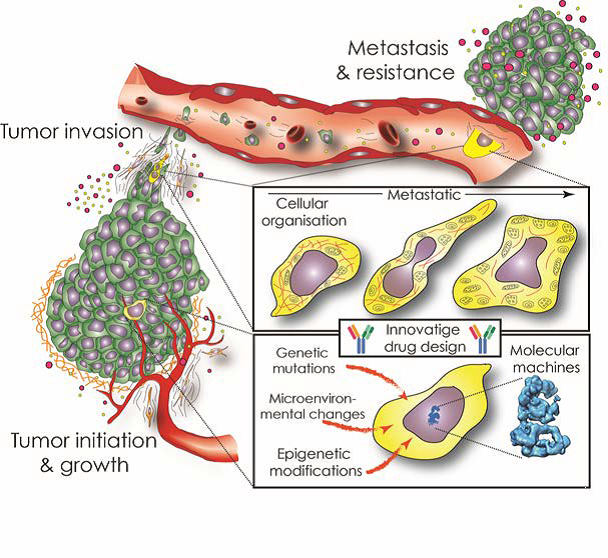 The NANOTUMOR project will explore the effects of epigenetic modification in cancer cells from recently identified molecular complexes frequently mutated in human cancers to the cellular organization and organelle dynamics of the diseased cell, to better understand the complex relationship between cell morphology and gene expression patterns. Retrograde pathways that link subcellular organization to gene expression e.g. lysosome informs nucleus.